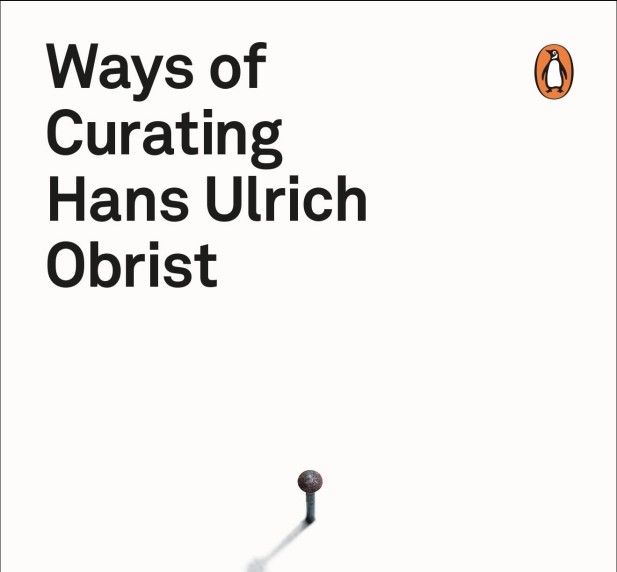 Hans Ulrich Obrist’s 2014 book, breezing through his career, curatorial influences and cultural mentors, is dedicated to David Weiss, one half of the famous Swiss duo Fischli and Weiss. The two artists crop up in Obrist’s account frequently, as does Dominique Gonzalez-Foerster or Christian Boltanski, architect Rem Koolhaas, philosopher Edouard Glissant and his personal art-historical heroes, such as Henry Cole, Willem Sandberg, Harald Szeemann and Suzanne Pagé. The book overspills with names that have exerted direct or indirect influence on Obrist’s development as a curator as well as people who he has sought out for their expertise in their respective fields – Obrist has always pursued bridging art with other disciplines. This is one of the most strongly preached pieces of advice in this interlacement of Obrist’s memories of first exhibitions, unexpected occurrences, blossoming relationships and thousands of air miles.

‘Ways of Curating’ harks back to Berger’s ‘Ways of Seeing’, or so I thought until I realized that Obrist would like the readers to entertain another possibility by leaving a teeny-tiny note on the last page: ‘In Ways of Worldmaking, Nelson Goodman wrote the art and science are both of utmost importance to understanding our multiplicity of worlds; this book’s title was inspired by his.’ Finding this only accidentally at the bottom of the acknowledgement list, the initially baffling arrangement actually epitomizes the same approach as the famous curator champions to curating exhibitions – slipping it into places and in ways it is not customarily associated with, into unexpected places.

‘Boetti told me that if I wanted to curate exhibitions, then I should under no circumstances do what everybody else was doing – just giving the artists a certain room and suggesting that they fill it. What would be more important would be to talk to the artists and ask them which projects they could not realize under existing conditions. Ever since, this has been a central theme of all my exhibitions. I don’t believe in the creativity of the curator… Instead, the process always starts with a conversation in which I ask the artists what their unrealized projects are, and then the task is to find the means to realize them. At our first meeting, Boetti said curating could be about making impossible things possible.’ (p.10)

Apparently reading Glissant every morning for fifteen minutes because of the philosopher’s inspiring concept of ‘archipelic thought which endeavours to do justice to the world’s diversity [and which] forms the antithesis to continental thought [with] its claim to absoluteness… Against the homogenizing forces of globalisation, Glissant coined the term mondialité (‘globality’) which refers to forms of worldwide exchange that recognize and preserve diversity and creolisation.’ (p.15)

‘Making art is not the matter of a moment, and nor is making an exhibition; curating follows art.’ (p.24)

‘Contemporary curator remains… close to the sense in curare of cultivating, growing, pruning and trying to help people and their shared contexts to thrive.’ (p.25)

‘Artists and their works must not be used to illustrate a curatorial proposal or premise to which they are subordinated. Instead, exhibitions are best generated through conversations and collaborations with artists, whose input should steer the process from the beginning.’ (p.33)

‘The show was an imaginary space of past and present coming together, as an exhibition should be.’ (p.35)

‘By the Renaissance, Kircher and other scholars were using ‘museum’ to refer to any place or object – a study, a library, a garden, an encyclopedia – where items were collected for learned study. Museums were supposed to be an objective archive of the past. By the late 19th century, walking through a series of interconnected rooms in a museum was understood as a journey through time, through stages of development that tell the story of history. But this does not mean the museum is a resting place – in the 20th and 21st centuries, the institution has recovered this multiplicity of roots.’ (p.43)

‘[Lucy] Lippard has… argu[ed] that a single place or locality is underpinned by multivalent meanings, emphasizing the need to work against homogenisation of our cultural spaces and the responsibility we have for valuing their underlying historical meanings and uses.’ (p.52)

‘As [Alexander] Dorner writes, ‘We cannot understand the forces which are effective in the visual production of today if we don’t examine other fields of life.’’ (p.64)

‘Duchamp had an enduring influence on [Walter] Hopps, through his focus on the exhibition as a totality, rather than on individual works. In the wake of their collaboration, Hopps formed one cardinal curatorial rule: in the organisation of exhibitions, the works must not stand in the way.’ (p.70)

‘Dorner’s notion that the museum should aspire to be a Kraftwerk, or power station, is echoed in [Pontus] Hultén’s view that the museum should be an open and elastic space; one that does not limit itself solely to the display of paintings and sculptures but provides a site for a myriad of public activities: film series, lectures, concerts and debates.’ (p.74)

‘[Christian] Boltanski was very clear on one point that has become one of my guiding principles: exhibitions, he said, should always invent a new rule of the game. People only remember exhibitions that invent a new display feature, he pointed out, and so that should be an ambition of each new exhibition.’ (p.79)

Obrist’s beginnings: ‘In 1974, Harald Szeemann had created a small exhibition about his grandfather, who was a hairdresser, in his apartment in Bern. [Another exhibition that was on my mind] was in 1986 in Belgium where curator Jan Hoet had hosted a show called Chambers d’Amis (Rooms of Friends) in a very intimate, non-institutional environment: he commissioned more than fifty artists to make works for an equal number of private apartments and homes around Ghent… And then both Fischli and Weiss and Christian Boltanski suggested to me that perhaps I was looking too hard [for exhibition spaces], that the solution could be my own flat, as with the Edgar Allan Poe story ‘The Purloined Letter’. And we began to think, and an answer occurred to us: my kitchen.

The answer was pragmatic… Perhaps because the show’s concept was pithy and fitting for me, artists immediately responded to it… Boltanski created a very hidden exhibit: he installed a projection of a candle, visible only through the vertical crack between the cabinet doors under the sink… Above the sink was a big cupboard, and here Fischli and Weiss installed a sort of everyday altar, using oversized, commercially packaged food from a restaurant supply store… The installation had Alice in Wonderland sense about it… Hans-Peter Feldmann decided to make an exhibition within the exhibition in my refrigerator. He found six eggs made out of dark marble, which he placed in the egg rack in the fridge door. And then he placed a board with small feathers on it on top shelf, setting up a charming visual rhyme in and amongst the few jars and cans… No one attempted to make a spectacular intervention- instead, they preserved the function of the kitchen while subtly adding to it.’ (pp.83-85)

‘It is often an intuitive attraction to certain figures, certain places and world views that allows one to remain receptive to [all kinds] of unusual curatorial opportunities.’ (p.95)

‘[Kasper] König…helped me realize that art can appear where you least expect it and he taught me how to work with space – that art and architecture are intertwined.’ (p.97)

‘One of my earliest exhibitions in Paris [was] held in a room at the Hotel Carlton Palace. This show followed an evolutionary principle: in contrast to a static exhibition, which does not change after the opening, new works were constantly added and occasionally the artists exchanged the items…for other ones… There was a group show in the wardrobe: the visitor was invited to try on the clothes. Dominique Gonzalez- Foerster transformed the bathroom into a yellow room… Hans-Peter Feldmann contributed a suitcase filled with his personal archive of photographs and Christian Boltanski sent a photo album. A claustrophobic and soundless videotape by the Israeli sculptor Absalon ran continuously on the TV… Andreas Slominski sent instructions by fax for me to carry out every day.’ (pp.108-109)

‘It demonstrated that simply introducing two people who one thinks should know each other can have a major effect on future artistic practice, whether through the impact they can have on each other’s work or through entirely new collaborations. It’s another form of curatorial practice and I have continued it ever since.’ (p.124)

‘Opposing what he called the ‘irreversible’ aspects of globalisation (uniformity, homogeneity), the philosopher Etienne Balibar once explained to me the need for artists and exhibitions to become nomadic, physically and mentally travelling across borders… Exhibitions should be borderline themselves.’ (p.128)

‘They can also form a bridge between the local and the global. By definition, a bridge has two ends, and as the artist Huang Yong Ping points out: ‘Normally we think a person should have only one standpoint, but when you become a bridge, you have to have two.’ (p.129)

‘So I thought it would be interesting to apply the idea of changing the rules of the game for a discursive event like a conference, similar to what I had done in exhibitions…. And we organized [a conference that] had all constituents of a colloquium except the colloquium. There were coffee breaks, a bus trip, meals, tours of the facilities but no colloquium.’ (p.153-154)

‘Once again, the role of the curator is to create free space, not occupy existing space. In my practice, the curator has to bridge gaps and build bridges between artists, the public, institutions and other types of communities. The crux of this work is to build temporary communities, by connecting different people and practices, and creating the conditions for triggering sparks between them.’ (p.154)

‘Reaching out to different worlds to connect them means going beyond the fear of pooling knowledge, something I think will become increasingly important as disciplines become ever more specialized.’ (p.156)

The book is written in an accessible, light-hearted way and reading it usually feels like having an honest conversation with an experienced arts professional. It may be an everyday reality for some, rendering the writing somewhat trite, but for the rest of us, not yet seasoned by years in the sector, it becomes an encouraging text blowing wind in our sails. Obrist describes his first steps as a curator, shares with readers that he only had 37 visitors one time and that most of his great ideas are actually an aggregate resulting from unstoppable discussions with others. Admittedly, he sweeps through the history and practice of curation from a very personal standpoint and leaves out what would have undoubtedly been compelling points to elaborate: the oft-criticised overlap between curators and artists, the spectacularisation of exhibitions (and institutions) or even his own astounding involvement with anything and everything in comparison to which the capitalist overproduction (and consumption) pale into insignificance. I also wish the quality of the staged shows would be delved into, rather than simple listings of who sent in what – how to achieve high standards and not slump into mediocrity is something young curators would definitely like to know about. Overall, however, those who need a wave of motivation, a crash-course in the history of curation and a peek into some ground-breaking exhibition making should definitely consult this pleasant book.