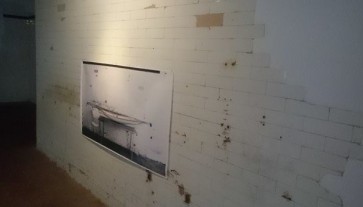 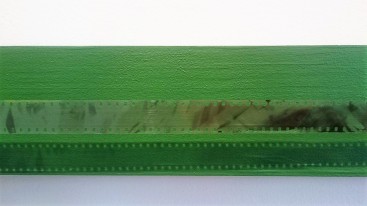 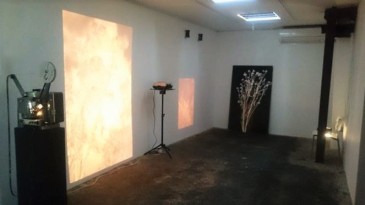 The  photogram film and garden plants make for an uncommon but richly allusive pairing in Cathy Rogers’ Light Touch exhibition at Pie Factory in Margate (open until 1st November). The delicate contact in the show’s title can be found in works scattered around four rooms of the former pork butcher’s, making the place resonate with a completely different character to its historical use.

Cathy’s photograms are records of herbs like lavender and rosemary briefly touching the photosensitive surface. Imagine them as surreptitious celluloid snakes sliding through the bushes in your back yard- whoever said that film is meant only for indoors?

The exposure creates haphazard abstract patterns of stems and leaves and shadows that flicker (burn?) even when the films are nailed to painted wooden planks. Motion is intrinsic to the artist’s other works, too as she mounts some of her films on crackling projectors and speedy images of lines and smudges appear on the walls. This is yet another way of producing the image, taking the captured ‘snakes’ and releasing them in a temporal (as well as literal) cycle.

The exhibition relies heavily on the fundamental constituents of the filmic image. Cathy puts the materiality of film and image centre stage- the cinematic event (slides, projector, image) is in her show understood primarily through surface, touch and time that are often invisible. This implies a reversal that is then fully articulated in the last room.  All Around You II (2013) features a suspended glass sphere that doubles as a pinhole camera in a dark room. What we essentially see then is the space around the sphere, an inversion of the positive and negative in image production and a nod to a perspective shift that encapsulates the premise of the exhibition- this may as well be Cathy’s own take on the magic of film.